Avivi, who has been teaching music since 2008 as a self-employed professional, saw her workload plummet in 2020 when the COVID-19 pandemic swept through Israel, shuttering schools and businesses amid restrictions aimed at keeping the deadly virus at bay.

“In 2020 I worked for only three months,” Avivi said in a phone interview with The Times of Israel.

Lockdown measures in Israel, which began in mid-March 2020, brought the economy to an near-total standstill. Unemployment figures jumped from a record low of under 4% at the beginning of March to some 28% by late April, as many businesses were forced to close their doors. The number of unemployed surpassed one million for the first time in Israel’s history, 85 percent of whom were put on unpaid leave (furloughed).

When the lockdowns took hold the government paid out monthly benefits to furloughed employees, but the financial relief skipped over self-employed workers, small business owners and freelancers. It was only after these professionals took to the streets in protest that a law was passed providing them with grants to help them economically survive the pandemic.

According to legislation passed in 2020 and 2021, small businesses and self-employed people who posted a drop of 25% in their turnover during the lockdown periods and of 40% between the lockdowns, compared to the same periods in 2019, were eligible to get a government grant. The grants were provided based only on the estimates and declarations of the businesses themselves, with no proof of a turnover drop required in real-time. The idea was to inject much-needed funds into these businesses immediately to keep them from going under, while a final reckoning would come later.

The grants were calculated (Hebrew) and provided to businesses, freelancers and self-employed people every two months, on the basis of an estimated drop in turnover compared to the same periods in 2019.

If these businesses later posted a higher turnover than originally estimated by the owners, they’d have to refund the tax authority for the funds they received for the months in which the grants were overpaid.

Because Avivi’s turnover dropped some 90% during 2020, she received a government grant of NIS 17,000 for every two-month period. But because in June 2020 she got paid for the months of January and February, during which she had worked, her turnover drop in the May-June period was some 38%, just under the 40% threshold set by the law which would have made her eligible for a grant for that two-month period.

Avivi has been active in advocating for the rights of self-employed people during the pandemic by helping them claim unemployment benefits and getting the above-mentioned grants, and is now fighting to change the repayment terms in the coronavirus grants legislation.

“The self-employed are and have always been second-rate citizens, and we don’t have the same rights as everyone else. No one looks out for us,” she said.

Salaried workers who were furloughed during the pandemic received unemployment benefits from the National Insurance Institute, and could perform off-the-books work or have a vacation and still get the benefits, she said. But the self-employed “strove to work. We have homes and kids and our business and fixed expenses. We didn’t sit around on the beach like some salaried workers could do.” 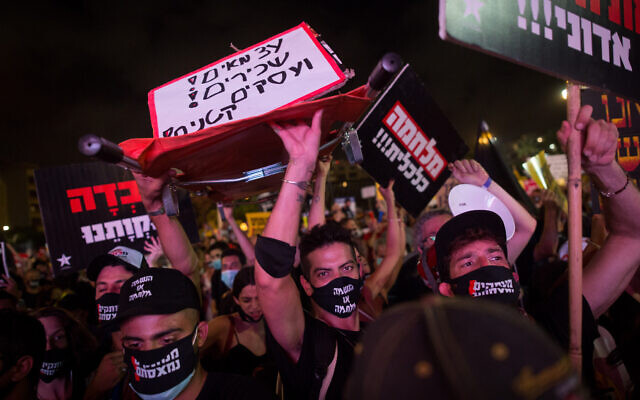 Self-employed Israelis protest at Rabin Square in Tel Aviv, calling for financial support from the Israeli government in the face of the coronavirus pandemic, on July 11, 2020. (Miriam Alster/Flash90)

The Israel Federation of Small Business Organizations, led by its president Roee Cohen — which took the plight of the self-employed to the streets in 2020 — is now spearheading a battle to have turnover decreases calculated annually, rather than on a two-monthly basis, and on a differential basis. This would mean that a person whose turnover decline is below the threshold set by the law would return just the difference and not the full payment.

“It should not be a zero-sum game, as it is now,” said Cohen. “If someone posted a 38% drop in turnover, just 2% below the 40% limit, they are not eligible for anything. Why should they have to return the full amount? A business that sees a 38% drop in revenues cannot survive either.”

The Tax Authority “wants to make its life easy,” said Cohen, as differential repayments are more complicated to handle. “There are some 100,000 businesses today that owe money back for certain periods,” he added. “The calculation system is unfair.”

In addition, since the government grants are linked to inflation, the sums that some small businesses need to return have ballooned, with inflation rising in Israel and worldwide.

According to data released by the Central Bureau of Statistics in March, inflation rose 3.5% in the 12 months ending March 2022, and 1.5% since the start of the year. The Bank of Israel has forecast that the inflation rate in 2022 will be 3.6%, 2 percentage points higher than a previous forecast. This will add thousands of shekels to the payments due.

Daniella, a 54-year-old, single front-end web builder, said she owes the tax authority NIS 48,000 ($14,000) in overpaid grants. She chose not to make her surname public for privacy reasons. She has been suffering from multiple sclerosis since 2005 and both she and her mother, whom she cares for, have heart conditions. 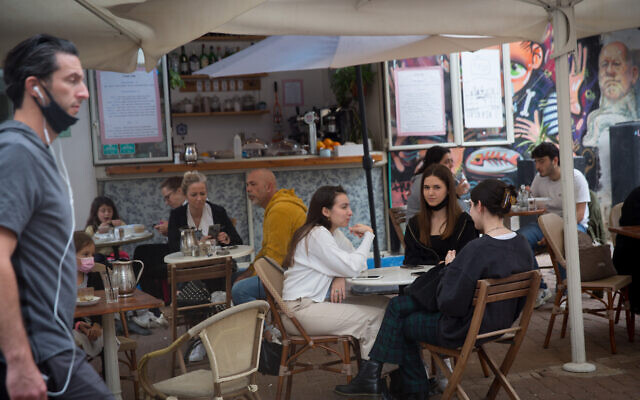 Israelis enjoy dining at restaurants, in Tel Aviv, as they were re-opened earlier this week, following a long period of lockdown. March 11, 2021. (Miriam Alster/FLASH90)

“I used to work with many clients abroad, but once coronavirus struck, these closed or needed less work,” she said. Because of her illness, she could not work outside the house, she said. She sent out a resume every day looking for work but to no avail, so she applied for and received the grants from the Tax Authority.

Then finally in 2021, she started working with a foreign client, in a role she shared with two colleagues. For simplicity, she alone issued the invoice for the work, even as the proceeds of the project were shared. Now the Tax Authority is asking her to pay back the grants she received.

She has shown them receipts proving that the work was split with others, she said, but regardless she has to pay back the NIS 48,000 by October, and will struggle to do so.

The Tax Authority has allowed businesses to come to an agreement (Hebrew) regarding the overpaid grants that allows a gradual repaying of the funds until December 2022. If the total amount owed is above NIS 15,000, the authority said on its website, businesses can pay in installments until June 31, 2023.

The authority has said it plans to start enforcing debt collection soon, but until the end of June the focus will be on grant recipients that actually posted a rise in turnover or a drop of 10% or less. But even those individuals and businesses can still come to an agreement regarding payment terms, the authority said.

The Tax Authority has so far received repayments of some NIS 1.5 billion (about $455 million) from grantees, without any enforcement, a person at the Tax Authority familiar with the matter told The Times of Israel. The authority is still due a few billion shekels in overpaid grants, the person said, out of a total of some NIS 40 billion ($12 billion) in grants it paid out during the pandemic. 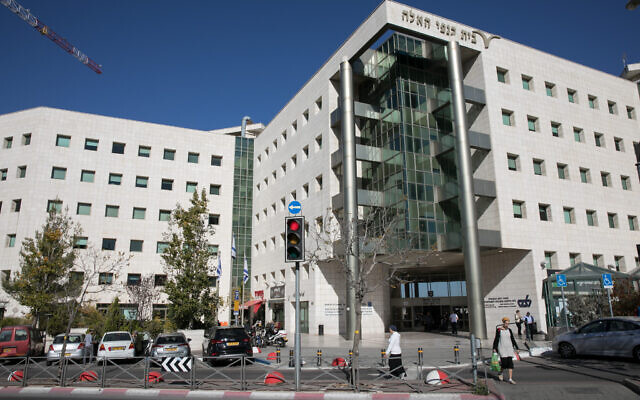 “The law set out clear criteria under which the grants would be given, based purely on the estimate and declaration of the self-employed and the businesses,” the source said. Post-facto, some of these businesses posted a drop in turnover that was smaller than estimated, and thus they need to refund that money.

According to Tax Authority estimates, half of the overpaid grants in cases that did not meet the requirements post-facto went to people and businesses that posted an increase — and not a drop — in turnover, the person said. “They got a kind of an interest-free loan from the taxpayer’s money for a number of years and now they have to repay it,” the person said.

The law sets clear criteria for getting the grant – a drop of 25% and of 40%, the person said. “You can’t decide not to return the money that you need to repay by law. The grants are the taxpayer’s money.”

If the law is now changed to enable a differential calculation, the person noted, then people who, correctly, had not requested grants because they did not meet the criteria specified by the law will have been discriminated against.

The Tax Authority has said in a statement that it has “even granted many concessions in the matter, with maximum consideration, even though these are people that submitted an incorrect statement for the grants.”

The authority underlined that although the deadline for returning the grants under a mitigation arrangement it proposed has passed, debtors who have not settled up by that date can contact the tax offices and reach an individual arrangement under the usual conditions for collecting tax debts, taking into account the circumstances of each case.